① Fiction In Tim O Briens The Things They Carried 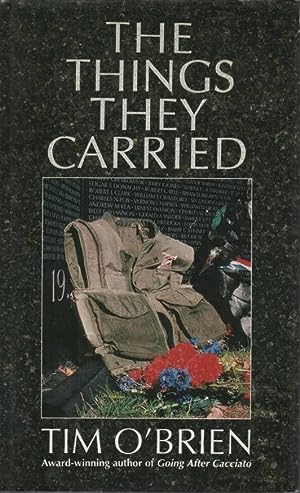 The Things They Carried by Tim O'Brien - Spin

A war that many Americans believed unfair and unnecessary. Will I ever return again? But there was little to no hope, and they knew it. They were being drafted and they could do absolutely nothing about it, only hope that at the end they would be returning to the enlightened faces of their loved ones, something that not many. A story that fits this genre of literature is The Things They Carried.

The story is about Tim O 'Brien, a Vietnam veteran from the Unite States, who tells stories about what had happened when he and his team were stationed in Vietnam. He also talks about what he felt about the war when he was drafted and what he tried to do to avoid going to fight in Vietnam. The Actual War Scenario - Vietnam War The Things They Carried, is a novel based on the Vietnam War, and the book reveals the truth of the war as the author remembers the war after twenty one years and snows his guilt and emotions for the war.

The Things They Carried, belongs high on the list of the best fiction about any war New York Times, "Book of the Century". Tim O 'Brien, the author. But when the work is viewed in its strict historical context, another layer of meaning rises to the surface. Tim O' Brien is a veteran; as a result there are many things he takes for granted or so we think and does not tell us. America's involvement in the Vietnam war resulted from internal domestic politics rather than from the national spirit. In war, the line between life and death is thinner than ever, and often, supplies, weapons, and the equipment of a soldier is the only thing that can cause the line not to clear. But, a soldier also carries his memory, memories, amulets, ghosts of the past, and trivial objects that do not let him forget that there is another life-the life-beyond war.

Soldiers of Alpha Company, who fought in Vietnam, carry everything. As a kid, I once got lost in the Minnesota wilderness. I spent a couple of miserable hours blundering around in the forest, an 8-year-old , totally turned upside down. The experience hit me hard and stayed with me into adulthood. I certainly felt lost in Vietnam, and not just in a physical sense. Others might feel lost in a career that is going nowhere, or in a bad marriage, or in the loss of a beloved child. Much of your work combines a gritty realism with bizarre, quirky characters — falling in the genre of dark humor.

What does this suggest about your overall vision or world view, or does it? It does, I suppose. But moving through that real world are human beings who have their eccentricities, fantasies, warped viewpoints and bizarre internal lives. So I suppose my fiction reflects that mixture of realism, on the one hand, and bizarre eccentricity, on the other. For me, a good story embraces both the ordinary and the extraordinary.

To my taste, a good story is a mix of the so-called real world and a much more mysterious and elusive interior world we all live in. What are the challenges in using this dark comic mode? The main challenge, I suppose, is to sustain a balance between darkness and comedy. Other readers did not find the books funny. Personally, I consider Tomcat in Love , if not my best book, certainly up there among the best. My sense of humor, which tends toward the outrageous, is plainly not for everyone. In The Things They Carried , a work of fiction, you blur the line between fiction and nonfiction.

Can you say why you did that? Two reasons. The first is I set out to write a book with the feel of utter and absolute reality, a work of fiction that would read like nonfiction and adhere to the conventions of a memoir: dedicating the book to the characters, using my name, drawing on my own life. This was a technical challenge. My goal was to compose a fiction with the texture, sound and authentic-seeming weight of nonfiction. A certain playfulness was involved. It was as if I were a bored tennis player who one day invented a new set of rules and put up a new kind of net. My hope was that by imposing certain technical requirements on myself, I would end up as a consequence with an interesting, compelling and fresh way of telling a story.

Real things occur: courtship, a first kiss, marriage, a honeymoon and so on. But your interpretation of these real events is a dynamic of the mind. I wanted to capture that feeling in The Things They Carried. Which is how we shape experience. The war might take on a heroic shape. Or it might be shaped with bitterness and irony and guilt. Why that technique? What I was just talking about.

You live a life, and you footnote it. Yet the world is complicated and ambiguous, and we footnote it. And so you toss and turn, mulling it over, stewing in memory, full of embarrassment, and after a while you begin to footnote the blunder in various ways — a wee-hour running commentary on your own misdeed. I think all of us construct a story line for our own lives that consists in good part of such footnotes — qualifications, justifications, erasures, embellishments, adjudications. Do you have a standard writing routine? I get the kids off to school, and then I sit down at about or so and write until they come home, which is around 4. I work on weekends, too, and on vacations — whenever and wherever I can find the time. How do you usually get started on a novel?

It varies. His name was Bob Kiley, but everybody called him Rat. The thematic focus and tensions of the story had crystallized without any conscious choice on my own part. What else might generate an idea? I had no idea who there people were, or why they were so incredibly sad, or what had brought them to that fogged-in porch. I knew nothing except that the image had been haunting me for a long while, maybe a year or two. It would occasionally pip to mind while I was washing dishes, or watching TV or reading a book. There was a certain mystery about it. Who were those two unhappy people? What was the source of their unhappiness? Would they find a path out of their troubles?

So quite naturally, without any volition on my part, In the Lake of the Woods became a mystery of sorts. How much revising is there in your writing process? I revise as I write. I might rework a sentence 10 times, 15 times or even, in occasional cases, a hundred times. So I delete it. I aim for a certain chime to the prose, a certain music or melody. And therefore, in a very important sense, the sound of language is instrumental in the very content of a story or novel. Plot , characters, settings, physical descriptions — all these are at least as much the product of sound as they are conscious intent on my own part. Have you ever gotten really hung up on a novel? Any works you abandoned? What do you tell beginning writers?