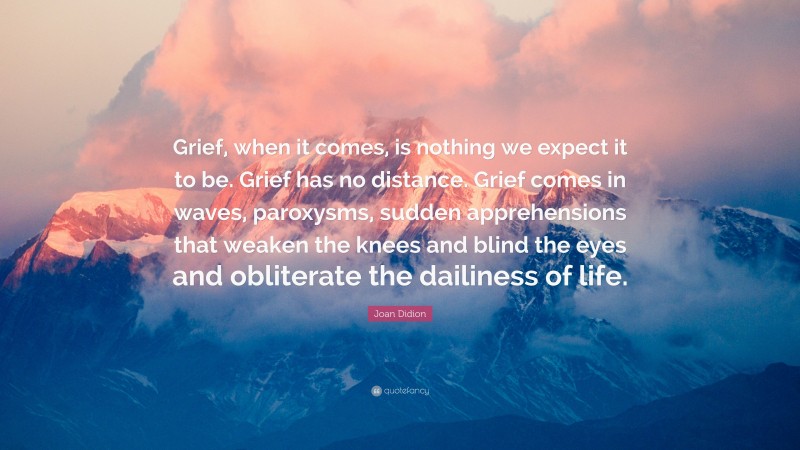 On Grief \u0026 Loss: Building a Post-Pandemic Future for Higher Ed

I can't imagine what I thought it was going to be, if it wasn't personal. Once this became clear, the urge to really consider her relationship with her daughter was instinctive and irresistible. You have to. If you don't examine it, you're I've always had this sense that the unexamined fact is like a rattlesnake. It's going to come after you. And you can keep it at bay by always keeping it in your eye line.

Didion was a child in the second world war. When her father left the family to fulfil army duties, she held her mother to ransom by stopping eating. She has always been slight and it annoys her when people comment on her frailty and interpret it as neurosis, instability, grief or an eating disorder. Back then, her mother took her to a paediatrician, who said she wasn't going to put on weight until the family reunited with her father. After that they followed him around, and Didion ate normally. She hates confrontation, but knows how to get what she wants by other means. She doesn't like joining the group.

In Hollywood, while she and John were living a fine life among friends in the film industry, she was nonetheless on the outside. We worked in it, but as writers you aren't ever — you don't have a very elevated role. That seems to me the more natural world. In the new book, Didion describes wryly how she and John, so often on movie sets, had to explain to Quintana the difference between trips "on expenses" and "not on expenses".

She knows how this sounds and addresses it with a shrug and a what-do-you-want; it's how we were. Anxiety still prevailed. On location in a part of the country she knew Quintana's birth family came from, she asked the studio to keep their names out of the local press in case they saw it and came to take her away. Those era-defining pieces she wrote in the 60s, collected in Slouching Towards Bethlehem and still stunning almost 50 years later, were mostly done on the hoof, with no great thought as to whether they'd last. John was trying to make a living. It wasn't until later that I started having a really good time doing that.

Like pop stars tired of playing the same back catalogue, she's perhaps weary of revisiting the 60s. Journalistically, Didion's more impressive second act was her writings on politics in the 80s, not least because they pissed off so many of the clubbable insider-hacks on the political circuit. Joe Klein got very exercised about a piece written during the Michael Dukakis campaign in In it, Didion broke ranks with her peers by writing of their complicity, as she saw it, in the fictional narratives cooked up by the campaign. When the piece was included in one of her anthologies , Klein, among those reporters she'd criticised, gave it a great howl of a review, accusing her of political naivety, stating the obvious and writing "effete, patronising nonsense".

Dukakis was the candidate and the fantasy was he liked to throw balls around on the tarmac while waiting for the plane. And of course he didn't. And the only people who were honest about it were the photographers, who referred to it as a set-up. Didion, like a lot of successful journalists, thought for a long time that novel writing was the greater art, and slaved over and published five novels. Nonetheless she now thinks she was misguided. Writing a novel, which is what I thought I'd like to do, turns out to be not very gratifying in the end because nobody reads them any more.

She is dispirited by the state of journalism, its fragmentation and the lack of venues for long pieces of the kind she likes to write. I think it's a wrong time to be writing. Even the New York Review of Books is running shorter pieces now, although they'll let you do whatever you want. You have to laugh at this. No, they'll let you do whatever you want, I suggest. The most pleasing creative experience she has had lately was the stage production of Magical Thinking, adapted by David Hare and expanded to deal with Quintana's death as well. When Didion speaks of the sudden death of Natasha Richardson , Redgrave's daughter and an old family friend, it is with fresh shock, for the death itself, from a freak skiing accident, and from the horrible coincidence of it occurring while her mother was appearing in an exposition of grief.

For Vanessa to have spent the better part of two years doing a play that dealt with the death of a daughter and then to have to go through it herself — it didn't seem real. I imagine it was terribly hard on the friendship; Didion's version of grief a sudden imposition on the actor when she was struggling with her own. But I think that there was a terror for both of us about it. I understood entirely why she didn't want to do an extra season for the play, and that was before Natasha died. Before that, Didion says, the play had been something of a relief — "I had a good time with all the people involved" — but until she had seen it so many times she became inured to the material, attending was also a form of masochism. She would stand way up in the theatre, by the lights, away from the audience, and watch her friend perform.

So they kind of made it OK for me. It was an odd experience. So successful were both the book and the play that, for the first time in her life, Didion found herself being recognised in airports. You were always hearing stories you didn't necessarily want to hear at that moment. I mean the intimate conversations I had with people about deaths in their families. Which is troublesome. It must have been very odd for Quintana to grow up in this world, she thinks, the only child of two writers who, as Quintana once put it with a certain amount of rebellious disgust, spent far too much time "dwelling" on things. The most difficult part of Blue Nights was writing about the adoption.

Quintana, towards the end of her life, had some contact with her birth family, and it was a not an altogether satisfactory experience. No one was awful, but neither was there an easy way to recover the bond. Looking on, Didion had the sense that there comes a point "at which a family is, for better or for worse, finished". She was always very grateful to these people, she says, "for letting her go. For giving her to me. So essentially I decided what I was looking for was a kind of directness I could never achieve. In Magical Thinking, Didion wrote of feeling the need to discuss all her work with John, as she always had. By the time she wrote Blue Nights that impulse had passed.

And I'm not even sure now that I miss it. I've been thinking a lot about it means to grieve as a non-believer. I find it unfortunate that so many Christians, in our culture that is dominated by Christians, seem to care more about whether or not they have to bake cakes for gay people, and so forth, than connecting with others, even queers , around these shared human experiences. That being said, there is more to Christianity that I am unable to believe in or connect with than these anti-LGBT interpretations.

Joan Didion, in The Year of Magical Thinking, called grief, "the relentless succession of moments during which we will confront the experience of meaninglessness itself. Didion ends the book with no apparent resolution of her grief at the death of her husband John. Instead, the book simply finishes: "I think about swimming with [John] into the cave at Portuguese Bend, about the swell of the clear water, the way it changed, the swiftness and power it gained as it narrowed through the rocks at the base of the point. The tide had to be just right. We had to be in the water at the very moment the tide was right. We could only have done this a half dozen times at most during the two years we lived there but it is what I remember.

Each time we did it I was afraid of missing the swell, hanging back, timing it wrong.